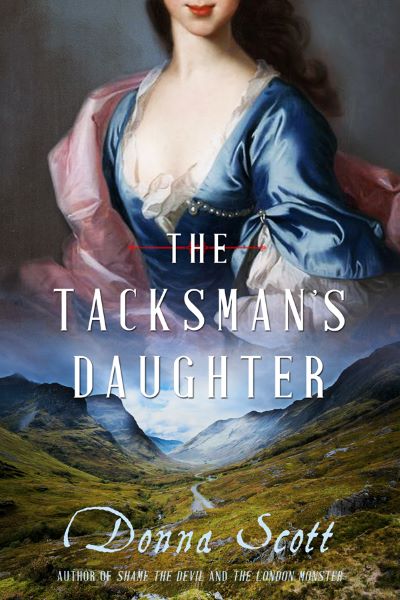 The Tacksman’s Daughter
by Donna Scott

Scotland, 1692. To escape a brutal winter storm, King William’s regiments descend on the small village of Glencoe. Caitriona Cameron, the tacksman’s daughter, cannot forget her unpleasant encounter the last time English troops appeared. She senses the army’s arrival might not be as innocent as it seems, but her warnings go unheeded. Not even MacIain, the MacDonald clan chief, listens. After twelve days of billeting in the villagers’ homes, the soldiers attack, committing one of the greatest atrocities in Highland history.

Cait escapes the assault with the help of Sergeant Edward Gage who is accused of being a traitor for not taking up arms against the MacDonalds. Edward is hunted by his debauched half-brother, Alexander, who stands to lose everything if King William attaints their father for his treasonous past deeds. With bad blood between them, Alexander sets out to capture Edward to prove his loyalty and save himself from ruin.

Cait and Edward travel to Edinburgh to confront the men they suspect are behind the attack, unaware that Alexander is headed there as well. Although Cait is convinced the chief of Clan Campbell is responsible, Edward suspects something much more sinister—that the orders came from higher up, possibly even from the king himself.

As accusations of betrayal, deceit, and treason abound, they are all trapped in a web of intrigue and danger, but not everyone will escape.

“The Tacksman’s Daughter is a fascinating read, at the heart of which is a truly horrifying historical massacre. The author brings the times alive in vivid detail, skillfully (and often humorously) weaving in ancient Gaelic language. Readers will be riveted!”—KD Alden, author of A Mother’s Promise

“. . . it’s a gripping read, and the author has a real skill for keeping the reader turning pages.” –SS, Penguin RH

“[Scott] does an excellent job of transporting her reader back to the seventeenth century Highlands. The dialogue felt so authentic, and the characters and Scottish landscape really jumped off the page.” -KK, Simon and Schuster

Donna Scott is an award-winning author of 17th and 18th century historical fiction. Before embarking on a writing career, she spent her time in the world of academia. She earned her BA in English from the University of Miami and her MS and EdD (ABD) from Florida International University. She has two sons and lives in sunny South Florida with her husband. Her first novel, Shame the Devil, received the first place Chaucer Award for historical fiction and a Best Book designation from Chanticleer International Book Reviews. Her newest novel, The London Monster, was released in November 2020. To learn about new releases and special offers, please sign up for Donna’s newsletter.

in which we MEET CAIT, the heroine

It was not the frigid air easing through the crack next to the window that covered Caitriona’s arms in gooseflesh, but the parade of foot soldiers that appeared at the snowy edge of the loch that February afternoon.  Most noticeable were the Redcoats, their scarlet wool stark against the loch’s pewter water and the thick copse of naked oaks behind them.  But there were others too—clansmen—their tartans indistinguishable in the blue-grey morning light.  Caitriona hugged herself as she watched the men struggle to lean into the wind that slowed their progress.

Above them, a murmuration of starlings dipped and circled.  The soldiers seemed undisturbed by their presence, but her nape tightened at their flying dance.  She stared at the birds, their swooping and swirling mesmerizing and beautiful.  They were usually gone by winter, and she wondered if the flock had stayed in Glencoe to warn her of these men now in approach.  Starlings signaled change—good or bad, that was yet to be seen.

“What has ye so taken, Cait?” her mother asked.

Caitriona didn’t turn to face her.  She pulled her sgian dubh from its sheath, then twirled it between her fingers, hoping the repetition of movement would soothe her mind as it had in the past.  “Have Sionn and Finnean been creating mischief again?”

Her mother joined her at the window, her hair lightly streaked with silver above her ears.  “Stealing cows?  Even yer cousins would agree ’tis too cold for that.”

“Then what do ye make of the men entering the glen?” Cait asked, her fingers and blade closing over the scar on her left palm, a painful reminder of the last time soldiers had arrived in their quiet village.

“Some are Englishmen.”  Her mother continued to stare at the landscape, her gaze moving higher to the starlings now flying past the loch.  “This isnae about a few missing kine.”

With each passing moment, more soldiers inched their way into Glencoe from the west.  As they edged closer, their muskets and black pikes poked through the blanket of mist hovering over the loch and its shore.  Cait’s shoulders stiffened.  This had nothing to do with stolen cattle.

Monday, March 14
Review at Passages to the Past

During the blog tour, we have one copy of The Tacksman’s Daughter up for grabs! To enter, please leave a comment below with your email address. Disclaimer: By entering this giveaway, your email will be added to Donna Scott’s newsletter.

The giveaway is open to the US only and ends on March 23rd. You must be 18 or older to enter. 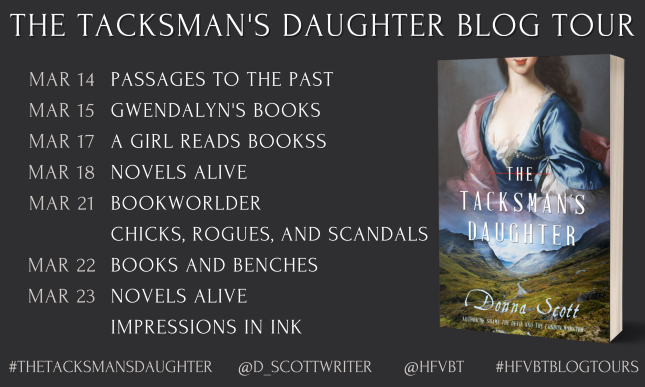 One thought on “Spotlight: The Tacksman’s Daughter by Donna Scott (excerpt+giveaway)”