Welcome to the Blog + Review Tour for The Indebted Earl by Erica Vetsch, hosted by JustRead Publicity Tours! 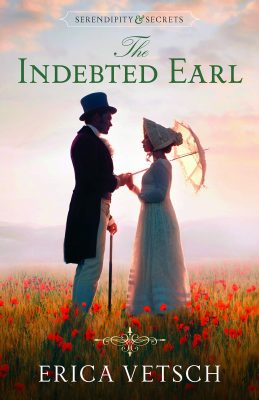 Can Captain Wyvern keep his new marriage of convenience all business–or will it turn into something more?

Captain Charles Wyvern owes a great debt to the man who saved his life–especially since Major Richardson lost his own life in the process. The best way to honor that hero’s dying wish is for Wyvern to escort the man’s grieving fiance and mother safely to a new cottage home by the sea. But along the way, he learns of another obligation that has fallen on his shoulders: his uncle has died and the captain is now the Earl of Rothwell.

When he and the ladies arrive at his new manor house in Devon, they discover an estate in need of a leader and a gaggle of girls, all wards of the former earl. War the new earl knows; young ladies and properties he does not. Still wishing to provide for the bereaved Lady Sophia Haverly, Charles proposes a marriage of convenience.

Sophie is surprised to find she isn’t opposed to the idea. It will help her care for her betrothed’s elderly mother, and she’s already fallen in love with the wayward girls on the Rothwell estate. This alliance is a chance to repay the captain who has done so much for her care, as well as divert her attention from her grief. When Wyvern returns to his sea commission, she’ll stay behind to oversee his property and wards.

It sounds so simple. Until the stalwart captain is arrested on suspicion of smuggling, and Sophie realizes how much he’s come to mean to her. Now she’ll have to learn to fight, not only for his freedom but also for his love.

MORE BOOKS IN THIS SERIES 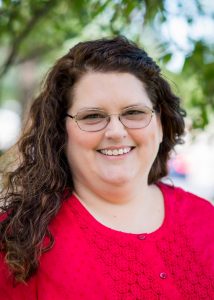 Best-selling, award-winning author Erica Vetsch loves Jesus, history, romance, and sports. When she’s not writing fiction, she’s planning her next trip to a history museum and cheering on her Kansas Jayhawks and New Zealand All Blacks. You can connect with her at her website, www.ericavetsch.com where you can read about her books and sign up for her newsletter, and you can find her online at https://www.facebook.com/EricaVetschAuthor/ where she spends way too much time!

Honora Mary leaned out of Cilla’s embrace, holding up her arms to Captain Wyvern. The captain backed up a step, puzzlement in his eyes. Honora Mary’s face crumpled, and her lower lip quivered.

“Honestly, she’s never met a stranger.” Cilla moved closer and handed the baby to the captain, who took her as if she were a bomb with a lit fuse.

The baby hung in his hands, his arms straight out, her face split with an adorable smile. A gout of spittle rushed over her lower lip as she squealed and kicked.

“She appears to have sprung a leak.” Furrows lined the captain’s brow beneath the forepeak of his bicorn.

Cilla laughed and dabbed at the baby’s chin. “She’s teething.”

Sophie smiled. “You look as if you’re the one about to shatter. Let her sit on your arm, and hold her against your chest so she doesn’t fall.” She helped him, but even with Honora Mary on his arm, he still looked as if he were holding an explosive. The man had lived through war, and he was flummoxed by a tiny girl.

Sophie wanted to laugh, the first such impulse in a long time. Something in her chest eased a bit, like the moment when you first took off your stays at night and drew a deep, unfettered breath.

(1) winner will receive a print copy of The Lost Lieutenant, The Gentleman Spy, & The Indebted Earl and a $10 Amazon gift card! 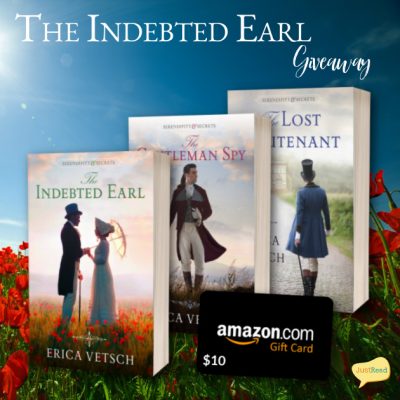 Be sure to check out each stop on the tour for more chances to win. Full tour schedule linked below. Giveaway began at midnight April 19, 2021 and lasts through 11:59 PM EST on April 26, 2021. Winner will be notified within 2 weeks of close of the giveaway and given 48 hours to respond or risk forfeiture of prize. US only. Void where prohibited by law or logistics.

13 thoughts on “Spotlight: The Indebted Earl by Erica Vetsch (excerpt+giveaway)”