The River Jewel: A Letter Series Novella
by Kathleen Shoop

For everyone who hopes to find the perfect match…

The novella, The River Jewel, takes readers of the bestselling Letter Series novels back in time, before there was a last letter, before the Arthurs lost everything, before they knew a girl named Pearl.

Meet Tilly Rabel, a proud oyster-woman, and Landon Lockwood, the troubled son of one of the wealthiest men in America. The two could not be less suited for love. But when an old legend draws Landon to a hidden river cove, Tilly and he find each other, are lured by growing attraction, and repelled by competing desires to control Tilly’s waters. The hidden pool is replete with valuable mussel beds and the source of everything that makes Tilly who she is. Landon sees the illustrious treasure as the path to proving to his parents he is worth their love and worthy of the Lockwood name. Can Tilly trust Landon with her heart, with her beloved mussel beds? Can Landon trust that he has truly changed and doesnít need his parents approval to live the life he wants?

Heartbreak, triumph, and a very special baby weave a tale sure to please readers whoíve read the entire Letter Series and those who are just starting the journey. 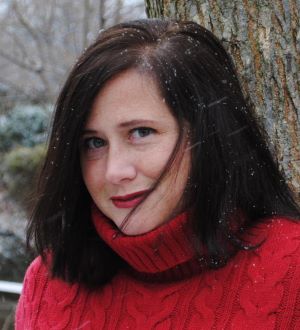 Bestselling author, Kathleen Shoop, holds a PhD in reading education and has more than 20 years of experience in the classroom. She writes historical fiction, women’s fiction and romance. Shoop’s novels have garnered various awards in the Independent Publisher Book Awards, Eric Hoffer Book Awards, Indie Excellence Awards, Next Generation Indie Book Awards and the San Francisco Book Festival. Kathleen has been featured in USA Today and the Writer’s Guide to 2013. Her work has appeared in The Tribune-Review, four Chicken Soup for the Soul books and Pittsburgh Parent magazine. She lives in Oakmont, Pennsylvania with her husband and two children.

This novella has the best kind of insta-love – that of reader and text. From the first lines, this is a story that draws the reader in, while warning that there will be a bit of bitter along with the sweet. And what a lovely story it is, with a sweet romance between a man and a woman of opposite circumstances.

When Landon Lockwood travels from New York to Iowa with big plans and a more entitled attitude than he is aware he carries, he unwittingly makes a poor impression on those he meets – including Tilly Rabel, local mussel-woman and owner of the cove he is searching for.

Like many a good fairytale, there are obstacles and comeuppances, villains and unexpected helpers, heartache and true love. But best of all, it’s a story of two people finding each other, and I love that red haired Tilly who swims like a mermaid rescues Landon first.

With lovely details about mussels and buttons, for those who are new to Kathleen Shoop’s The Letter series or have read the novels that follow the events in The River Jewel, this is a sweet and enchanting prequel that sweeps the reader away to a place where time stands still in 1870’s Iowa.

Come closer. Closer. Let the honeysuckle draw you down the hidden, woodsy path where the songbirds announce your arrival and the sound of summer crickets echoes inside your chest. One more step. Ah, that’s good, no more. Don’t slip into the river, not where the current hurries sneaky but silent, strong as a magnet ripping metal out of your hand. Away, away you’d go. So careful stepping. Stay on the cove side of the land and listen in…

Once upon a time in that quiet cove, obscured from boating traffic by a high, thin slice of land, a love story was born. This one, different from all the others because this fairy tale’s braided with the oddest sense of happy and sad, a murky condition like where river mussels start and end their lives. Did you know there were such things—muddy, happy, sad senses of being, places to live, and endings that’re really beginnings? The river mussels know. You must have felt it before, that state of bluesy joy.

Well maybe you’ve only experienced bliss, and for you, this story might not feel right. But for the rest who wend their way through good and bad, lost and found and lost again, this story will feel familiar… but new. Because this story got lost in all the rest of the perfectly, pristine happy ending tales. But now here it is… lean in tight and listen to the whispered story of the secret jewel-filled river cove.

It happened one summer, around 1875 on the outskirts of Des Moines, Iowa. Deep in a hidden river cove, Landon, the wealthy, youngest son of the Lockwoods—yes, those Lockwoods—set off to earn his parents’ love by way of proving he could be the type of son who deserved it.

The task was simple. To get them to love him, he needed to make a lot of money—more capital than any one person needed, more cash than anyone could imagine. Anyone but his parents—their minds never stopped envisioning the next enormous amount—hundreds of thousands, millions, even billions. Oh, yes. No amount was too big to dream. That was the only way with the Lockwoods, even the mother. Especially the mother. And that was the only way Landon understood love.

So there he was, edging along a crooked finger of land. It curved with the Des Moines River to its left and a serene, lily-scented cove of crystal water to its right. He steadied his feet on the mossy rock, pulled his map from his pocket and studied the drawing. He squinted into the sun, toward the calm cove waters then back at the rushing river. Seven great oak trees marched around the perimeter of the inlet, leafy hand, in leafy hand.

He poked at the map. The man who sold it to him had made a notation that Landon would smell the cove before he saw it. Landon had mistakenly thought that meant the water would bear a horrible smell, like factory waters back east. A stench was the only thing he could imagine having such an impact. Not even his beach cottage property in Newport smelled as glorious as this cove did. It was these specific botanic fragrances curling off the trees and flowers, mixing with the scent of fresh water, bearing a sense of purity, that made him sure he’d found it. He’d never be able to describe the smell for anyone. But, this was it. He tapped the map again. It was exactly as he’d been told.

As Landon Lockwood compared his map against what, until that moment, he’d been convinced was a drunkard’s fantasy, Tilly Rabel, daughter of a mussel-woman and fisherman, left her cottage. She hummed and flounced along, tossing seed to her bluebirds, stopping to scratch the bunny mama under the chin before tucking her shucking knife into her canvas harvesting bag. She stripped down to her shimmy and bloomers and inhaled the steamy hydrangea-scented August air as she tied the rope of the bag around her waist.

The Rabel’s cove sat inside an embrace of crescent-shaped land. An underground rivulet fed it from one side and the Des Moines River filled it from the other. A hidden button of land and water, it created the perfect spot for fishing and harvesting mussels. This was Tilly’s legacy, her everything.

Distracted by the thought of her best friend marrying and leaving for California, Tilly waded into the cove, the water icing her ankles and raising bumps on her skin. She double-checked the knotted rope that held the bag tight to her waist and splashed in further before diving into the deep center waters. She squeezed her legs together, whipping them like she’d sprouted a mermaid tail, rotating onto her back then belly then back, then diving under, descending where the sunbeams could only hope to reach.

Get a move on. Time to work.

She dolphin-kicked up for breath, a smattering of sunrays mottling the surface water through the leafy canopy. She paddled toward the muddy beds, closer to the shoreline, toward the mussels, to where the pink and blue heelsplitters live.

She was taking a final stroke before diving under when a foreign sound grabbed her, stilling her like the thick afternoon air. A scraping sound came. She closed her eyes and cocked her ear. Where had the noise come from?

There it was again.

From the river side of the cove.

She whipped to her left.

Her mouth fell open and she dropped under the surface to her chin, the steady drip of water from her nose mimicking her heartbeat. Her skin tingled. Not because a strange man invaded her territory, but because he was in fact the third strange man to happen upon her cove in a month.

Wednesday, August 26
Review at Passages to the Past
Feature at I’m All About Books

During the Blog Tour, we are giving away a prize pack including a copy of the book, a bracelet, a journal, and a $50 Amazon Gift Card to one lucky winner! To enter, please use the Gleam form below.

The giveaway is open to US residents only and ends on September 14th. You must be 18 or older to enter. 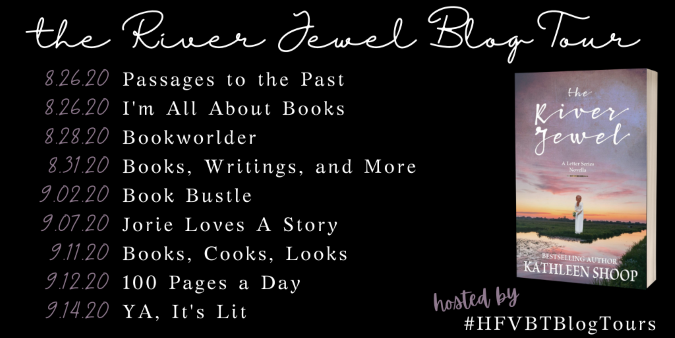 This review refers to a finished copy I voluntarily received and read. A positive review was not required and this review contains only my own honest opinions.

4 thoughts on “Spotlight: The River Jewel by Kathleen Shoop with an excerpt, review, and giveaway link!”